From the sixth century, Bangor Abbey (founded by St. Comgall) and Movilla Abbey (founded by St. Finnian) were the two great monastic centres of Christianity on the Ards Penninsula. By the eighth century they were centres of learning and religion, but the arrival of the Vikings in the ninth century brought great change. In 824 Bangor Abbey was so ravaged that it lay derelict for centuries thereafter. The arrival of the Anglo-Normans, under John De Courcy, brought a new direction and new life to Christianity in Ards. De Courcy’s wife, Lady Affreca, established the great Cistercian house of Grey Abbey in 1193, while De Courcy himself founded the Benedictine Black Abbey. The ruins of Grey Abbey are among the most famous in Northern Ireland and are well worth a visit, but nothing of Black Abbey remains, though its site can still be traced to a mile or so south-west of Ballywalter.

As far as we know, the ecclesiastical history of the Parishes in this area begins with Black Abbey. At one time, they all formed part of the possessions of the monastery. It seems likely that it was during this period of connection with the Abbey that the three old Parish Churches were built: one at Innishargie, the ruins of which lie just over a mile west of the present St. Andrew’s, one at Ballyhalbert, the ruins of which can be seen on the Harbour Road, and one at Ballywalter (known as Whitechurch or Alba Ecclesia), the ruins of which can be seen in Whitechurch Cemetery about half a mile from Ballywalter on the Dunover Road.

The sixteenth and seventeenth centuries brought further changes to religious life in Ards. Black Abbey was dissolved under Henry VIII, but the Reformation made little progress in the are until the arrival of Scottish settlers during the reign of James I. By the end of the seventeenth century, the Scots had organised into a separate religious body in the Presbyterian system. A comparitively small section of the population continued to attend the parish churces. By this time the old church at Innishargie was derelict and the churches at Ballyhalbert and Whitechurch were in a bad state of repair.

Early in the reign of Queen Anne it was decided to build a new church to serve all three parishes. An act of Parliament was passed for this purpose, which stated:

‘the three parishes of Ballywalter, Ballyhalbert and Innishargie in the Diocese of Down shall be forever united, after the death of either of the present incumbents…and that a church shall be built in one of the townland of Innishargie, in such a place as shall be appointed by the Archbishop of the Diocese, with the consent of the owner of the land.’

Accordingly, in 1704, a new church was erected on a central site, about one mile from the old church of Innishargie. The new parish, formed from the three old parishes, was known as St. Andrew’s. This name kept alive the old link with Black Abbey, which had been dedicated to St. Andrew. For 140 years St. Andrew’s was the centre of church life in the area. In addition to looking after the spiritual needs of the united parishes, the church cared for the poor, at one stage setting up the St. Andrew’s Charitable Institution, supervised upkeep of the roads and welfare of unwanted children and orphans. Vestry records, still intact, bear witness to this caring at a time before there was any local government.

By the nineteenth century, population increases led to the realisation that each parish once more needed a church of its own. On 29th Jjune 1844 an Act of Parliament dissolved the Union of Innishargie, Ballyhalbert and Ballywalter. The parishes of Ballyhalbert and Ballywalter were revived and the new parish of Kircubbin was created. In 1843 the first daughter church (dedicated to the Holy Trinity) was built in Kircubbin, follwed by Ballywalter in 1849 (also dedicated to the Holy Trinity), and Ballyhalbert in 1852 (dedicated to St. Andrew). In this redivision, the ancient parish of Innishargie disappeared. It was suggested that the old 1704 church should be ‘recycled’ into the building of one of the new churches, but the then Primate, Archbishop Beresford, opposed its destruction and the church was preserved for the people of the neighbourhood who were attached to it. And so St. Andrew’s still stands today, a witness to over three hundred years of Christian worship.

Two major programmes of restoration have been carried out: one in 1966 and the other 2004. In 1966 the Victorian wooden panelling was removed from the walls as was the 1749 barrel-vaulted ceiling, which exposed the original 1704 oak timbers and the top of the East window that had been hidden by the ceiling (Fig.1). The floor tiles were replaced with Scrabo stone flags. The porch, which was also built in 1749, had a ceiling to provide a vestry at first floor leve reached by a staircase. Both the ceiling and staircase were removed in 1966 so that the fine stone doorway with the date stone can now be seen (Fig.2). 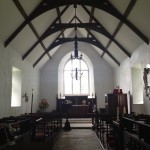 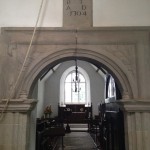 In 2004 the internal and external walls were stripped and re-plastered  In the sanctuary the steps were realigned and the concrete floor replaced with sandstone flags. The north and south windows in the church, and the west window in the porch, were restored. The roof was stripped and re-slated using original slates where possible and reclaimed matching slates elsewhere. An electric heating system was also installed. The total cost was around £100,000 and the bulk of the fund was provided by the Heritage Lottery Fund, the Esme Mitchell Trust and the environment and heritage department of the DOE. It was particularly fitting that funding was also provided through the Marshall Beresford Fund, as it was because of the intervention of Archbishop Beresford that the church survived.